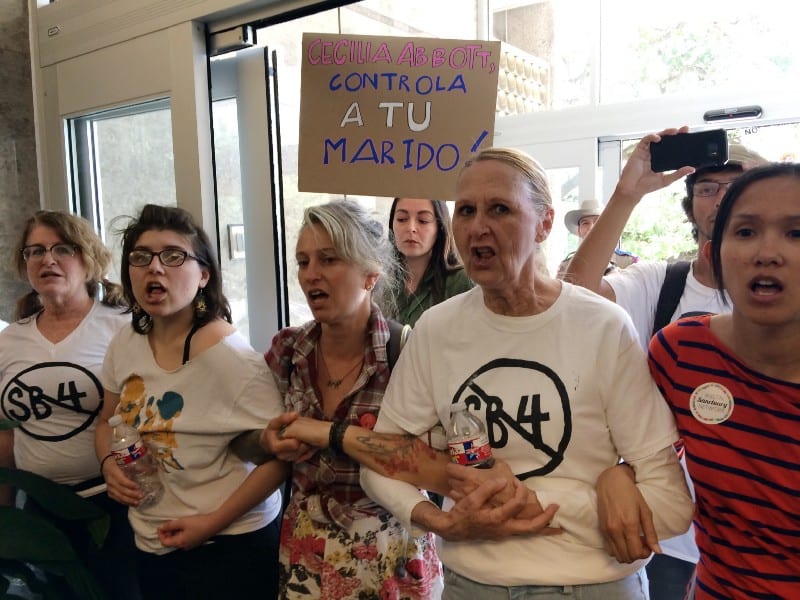 On May 7, 2017, the governor of Texas Greg Abbott, signed a new document that would go into law September of this year. This new law addressed the controversy around “ Sanctuary cities ” and now requires police to ask about a person’s legal status. In simple terms this new law would require local police to question a person’s legal status and arrest them if they are undocumented. If they do not, the police can face criminal charges as well as fines. This new law is being met with extreme resistance from Pro-Immigration groups and the American Civil Liberties Union but also applauded by many. I will try to highlight the viewpoints from both sides to help easily paint the picture.

The easiest way to explain the idea of a sanctuary city is to first understand the difference between Federal and State law. Immigration is Federal law and handled by Department of Homeland Security (DHS) and the Department of Justice. In the past, it was the duty of DHS to find and catch undocumented people, not state/local  law enforcement. However, once an undocumented person was arrested and convicted by a State Judge they are SUPPOSED to be reported to Immigration for deportation. This is where the term Sanctuary Cities comes into play. There are certain cities/counties that even after conviction they do not report the undocumented person to DHS and let them leave jail after completing their sentence. With the new President, he vowed to put an end to “sanctuary cities” and Texas quickly followed. The catalyst for this action occurred in San Francisco (which is a Sanctuary city) in 2015, when a girl was killed by an undocumented individual despite him having been in jail multiple times. The argument is if San Francisco complied and notified Immigration officials, the individual would have been deported and this murder never would have happened. By implementing this new law, Texas hopes to facilitate the deportation of undocumented individuals.

However, the opposition of this new law argues many different points. One complaint of many local law enforcement is that they would be spread too thin. They do not have the manpower nor would that be a good use of local law enforcement.  Their view is that our police have bigger issues to deal with than doing the work for DHS. They can’t do the work of DHS and still keep up with their local duties. Others say that we can’t hold all the undocumented people in jail because there just isn’t enough room. A similar law had been tried in Arizona a few years back which gave the police the power to ask for an individual’s legal status. Ultimately this law was removed but many people argue that this new Texas law is the same wolf in different sheep’s clothing.

Even though this new law is supposed to come into effect on September 1, 2017, it will be met with much opposition and legal challenges. It will be interesting to see if other states follow Texas’s example and implement similar laws. Below is an excerpt from the Associated Press regarding the new bill.
The Associated Press reports:

“The new Texas law was blasted by opponents as the nation’s toughest on immigrants since Arizona’s crackdown in 2010, disparagingly known as the ‘papers, please’ provision. They are now vowing a court challenge in Texas similar to what unfolded in Arizona.

“Every major police chief in Texas, which includes some of the largest cities in the U.S., opposed the measure that allows police to inquire about the immigration status of anyone they detain, a situation that can range from arrest for a crime to being stopped for a traffic violation.

“It also requires police chiefs and sheriffs — under the threat of jail and removal of office — to comply with federal requests to hold criminal suspects for possible deportation. Republicans have a strong majority in the Legislature and shoved aside Democratic objections, even as President Donald Trump’s efforts to withhold federal funding for sanctuary cities have hit roadblocks in federal courts.”